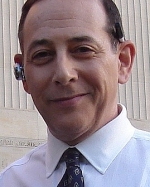 Education:
Boston University; The ca Institute of the Arts, CA

Paul Reubens is an American actor, writer, film producer and comedian, best-known for his character Pee-wee Herman. Reubens joined the Los Angeles troupe The Groundlings in the 1970s and started his career as an improvisational comedian and stage actor. In 1982 Reubens put up a show about a character he had been developing during the last few years. The show was called The Pee-wee Herman Show and it ran for five sellout months with HBO producing a successful special with it. Pee-wee became an instant cult figure and for the next decade Reubens would be completely committed to his character, doing all of his public appearances and interviews as Pee-wee. In 1985 Pee-wee's Big Adventure, directed by the then-unknown Tim Burton, was a financial success and, despite receiving mixed reviews, it developed into a cult film. Big Top Pee-wee, 1988's sequel, was not as successful as its predecessor. Between 1986 and 1990, Reubens starred as Pee-wee in the CBS Saturday morning children's program Pee-wee's Playhouse.

In July 1991, after deciding to take a couple of years' sabbatical from Pee-wee, Reubens was arrested for indecent exposure in an adult theater in Sarasota, Florida. The arrest set off a chain reaction of national media attention that changed the general public's view of Reubens and Pee-wee. The arrest postponed Reubens' engagement in big projects until 1999, when he appeared in the big-budget Mystery Men and Blow, and started giving interviews as himself rather than as Pee-wee.

Since 2006, Reubens has been making cameos and guest appearances in numerous projects, such as Reno 911!, 30 Rock, Dirt and Pushing Daisies. Since the 1990s, he has worked on two possible Pee-wee films ? one dark and adult, dubbed The Pee-wee Herman Story, and one a family-friendly epic adventure called Pee-wee's Playhouse: The Movie.

In early 2010 Herman played Pee-wee in a new production of The Pee-wee Herman Show at Club Nokia. He is also working on a new film, Pee-wee's Playhouse: The Movie. 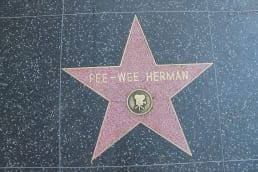