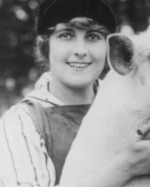 Pearl Fay White was an American film actress, the so-called “Stunt Queen” of silent films, most notably in The Perils of Pauline.

White was born in New Jersey then moved to Missouri, and lived on a farm with her four brothers and sisters. Her parents, Edgar and Inez White, moved to Springfield, Missouri, where she grew up with an interest in the theater. She began performing with the Diemer Theater Company, located on Commercial Street, while in her second year of high school. In 1907, at age 18, she went on the road with the Trousedale Stock Company, working evening shows while keeping her day job to help support her family. She was soon able to join the company full time, touring through the American Midwest. That year she married fellow actor Victor Sutherland, but they soon separated and eventually divorced.

White played minor roles for several years, when she was spotted by the Powers Film Company in New York. She claimed she had also performed in Cuba for a time under the name Miss Mazee, singing American songs in a dance hall. Her travels as a singer took her to South America, where she performed in casinos and dance halls. In 1910, White had trouble with her throat, and her voice began to fail from the nightly theatrical performances. She made her debut in films that year, starring in a series of one-reel dramas and comedies for the Powers Film Company in the Bronx, New York.

In 1910, White was offered a role by Pathé Frères in The Girl From Arizona, the French company’s first American film produced at their new studio in Bound Brook, New Jersey. She then worked at Lubin Studios and several other of the independents, until the Crystal Film Company in Manhattan gave her top billing in a number of short films.