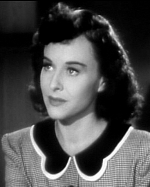 Paulette Goddard was an American film and theatre actress. A former child fashion model and in several Broadway productions as Ziegfeld Girl, she was a major star of the Paramount Studio in the 1940s. She was married to several notable men, including Charlie Chaplin, Burgess Meredith and Erich Maria Remarque. Goddard was nominated for an Academy Award for Best Supporting Actress for her performance in So Proudly We Hail!. Paulette Goddard was born Marion Pauline Levy. She was an only child, born in Whitestone Landing, Queens, Long Island. Her father, Joseph Russell Levy, was Jewish, and her mother, Alta Mae Goddard, was Episcopalian and of English heritage. Her parents divorced while she was young, and she was raised by her mother. Her father virtually vanished from her life, only to resurface later in the late 1930s after she became a star. At first, their relationship seemed genial enough, as they used to attend film premieres together, but then he sued her over a magazine article that claimed he abandoned her when she was young. They were never to reconcile and upon his death, he left her just one dollar in his will. She remained very close to her mother, however, as both had struggled through those early years, with her great uncle, Charles Goddard lending a hand.

Charles Goddard helped his great niece find jobs as a fashion model, and with the Ziegfeld Follies as one of the heavily-decorated Ziegfeld Girls from 1924 to 1928. She attended Washington Irving High School in Manhattan at the same time as Claire Trevor.

Her stage debut was in the Ziegfeld revue No Foolin in 1926, and played a small role in Rio Rita. The next year she made her stage acting debut in The Unconquerable Male. She also changed her first name to Paulette and took her mother’s maiden name as her own last name. She married an older, wealthy businessman, lumber tycoon Edgar James, in 1926 or 1927 and moved to North Carolina. Goddard returned to Hollywood in 1929 and they were divorced in 1930.