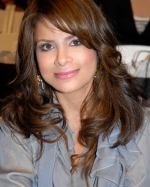 In the 1980s, Abdul rose from cheerleader for the Los Angeles Lakers to highly sought-after choreographer at the height of the music video era before scoring a string of Pop-R&B hits in the late-1980s and early-1990s. Her six number one singles on the Billboard Hot 100 tie her for fifth among the female solo performers who have reached #1 there. She won a Grammy for “Best Music Video – Short Form” for “Opposites Attract” and twice won the “Primetime Emmy Award for Outstanding Choreography”. Abdul has sold approximately 30 million albums worldwide since her singing debut in 1988.

After her initial period of success, she suffered a series of setbacks in her professional and personal life, until she found renewed fame and success in the 2000s as a judge on the television series, American Idol, for eight years, before departing from the show. Abdul has since been considering other TV show appearances, and working on a new album.

Abdul was born in the San Fernando Valley of Los Angeles, the daughter of Lorraine Abdul, a concert pianist who once worked as film director Billy Wilder’s assistant, and Harry Abdul, a former livestock trader and owner of a sand and gravel business. Her father, a Syrian Jew, was born in Aleppo, Syria, raised in Brazil, and subsequently emigrated to the United States; Abdul’s mother, also Jewish, is originally from Minnedosa, Manitoba, and Abdul derives Canadian citizenship through her. She has a sister named Wendy, who is 7 years her senior. In 1977, she graduated from Van Nuys Junior High School and was voted girl with the funniest laugh.