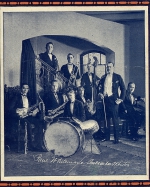 Paul Samuel Whiteman was an American bandleader and orchestral director.

Leader of the most popular dance bands in the United States during the 1920s, Whiteman’s recordings were immensely successful, and press notices often referred to him as the “King of Jazz.” Using a large ensemble and exploring many styles of music, Whiteman is perhaps best known for his blending of symphonic music and jazz, as typified by his 1924 commissioning and debut of George Gershwin’s jazz-influenced “Rhapsody In Blue”. Whiteman recorded many jazz and pop standards during his career, including “Wang Wang Blues”, “Mississippi Mud”, “Rhapsody in Blue”, “Wonderful One”, “Hot Lips”, “Mississippi Suite”, and “Grand Canyon Suite”. His popularity faded in the swing music era of the 1930s, and by the 1940s Whiteman was semi-retired from music.

Whiteman’s place in the history of early jazz is somewhat controversial. Detractors suggest that Whiteman’s ornately-orchestrated music was jazz in name only, and co-opted the innovations of black musicians. Defenders note that Whiteman’s fondness for jazz was genuine, that his bands included many of the era’s most esteemed white jazz musicians, and argue that Whiteman’s groups handled jazz admirably as part of a larger repertoire. In his autobiography, Duke Ellington declared, “Paul Whiteman was known as the King of Jazz, and no one as yet has come near carrying that title with more certainty and dignity.”

Whiteman was born in Denver, Colorado. After a start as a classical violinist and violist, he led a jazz-influenced dance band, which became popular locally in San Francisco, California in 1918. In 1920 he moved with his band to New York City where they started making recordings for Victor Records which made the Paul Whiteman Orchestra famous nationally.