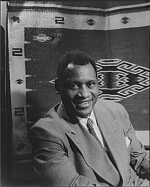 Paul LeRoy Bustill Robeson was an internationally renowned American bass-baritone concert singer, actor of film and stage, All-American and professional athlete, writer, multi-lingual orator, scholar and lawyer who was also noted for his wide-ranging social justice activism. A forerunner of the civil rights movement, Robeson was a trade unionist, peace activist, Phi Beta Kappa Society laureate, and a recipient of the Spingarn Medal and Stalin Peace Prize. Robeson achieved worldwide fame during his life for his artistic accomplishments, and his outspoken, radical beliefs which largely clashed with the Jim Crow climate of the pre-civil rights United States. He became a prime target of the right during the McCarthyist era. Despite his being one of the most internationally famous cultural figures of the 20th century, persecution by the US government and media virtually erased Robeson from mainstream US culture and subsequent interpretations of US history, including civil rights and black history.

Robeson was the first major concert star to popularize the performance of Negro spirituals and was the first black actor of the 20th century to portray Shakespeare's Othello on Broadway. As of spring 2010 Robeson's run in the 1943&ndash;45 Othello production still holds the record for the longest running Shakespeare play on Broadway. In line with Robeson's dissatisfaction with movie stereotypes, his roles in both the US and British film industries were some of the first parts ever created that displayed dignity and respect for Black film actors, paving the way for Sidney Poitier and Harry Belafonte.

At the height of his fame, Paul Robeson chose to become a primarily political artist, speaking out against fascism and racism in the US and abroad as the United States government and many Western European powers failed after World War II to end racial segregation and guarantee civil rights for people of color. Robeson thus became a prime target of the Red Scare during the late 1940s through to the mid-1960s. His passport was revoked from 1950 to 1958 under the McCarran Act and he was under surveillance by the Federal Bureau of Investigation and Central Intelligence Agency and by the British MI5 for well over three decades until his death in 1976. The reasoning behind his persecution centered not only on his beliefs in socialism and friendship with the Soviet peoples but also his tireless work towards the liberation of the colonised peoples of Africa, the Caribbean, Asia and the Australian aborigines, his support of the International Brigades, his efforts to push for anti-lynching legislation and the racial integration of major league baseball among many other causes that challenged white supremacism on six continents.

Condemnation of Robeson and his beliefs came swiftly from both the United States Congress and many mainstream black organizations including the National Association for the Advancement of Colored People. To this day, Paul Robeson's FBI file is one of the largest of any entertainer ever investigated by the United States Intelligence Community, requiring its own internal index and unique status of health file. Despite persecution and limited activity resulting from ailing health in his later years, Paul Robeson remained, throughout his life, committed to socialism and anti-colonialism as a means to world peace and was unapologetic about his political views. Present day advocates and historians of Paul Robeson's legacy have worked successfully to restore his name to many history books and sports records, while honoring his memory globally with posthumous awards and recognitions.