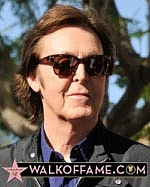 Continuing with Hollywood’s 125th birthday celebration, the Hollywood Chamber of Commerce proudly announced on February 1, 2012 that music legend Paul McCartney would be honored with his star on the Hollywood Walk of Fame today, Thursday, February 9, 2012 at 2pm. The circle is now complete, McCartney’s star is now lined up on the famed walk alongside his fellow Beatles, Ringo Starr, George Harrison and John Lennon in front of the famed historic Capitol Records building located at 1750 N. Vine Street.  The 2,460th star in the Recording category was unveiled as President and CEO Leron Gubler presented the star to the legendary musician in the midst of thousands of adorning fans and McCartney’s family and friends. Celebrity guests included: Neil Young, Elvis Costello, Herbie Hancock, Dave Koz, Diana Krall, Jeff Lynne, Joe Walsh and many others.

Paul McCartney was born in Liverpool on June 18, 1942.  He was raised in the city and educated at the Liverpool Institute.

Having changed the world of music forever with The Beatles, McCartney has continued to push boundaries for more than 40 years as a solo artist, member of Wings, Brit award-winning classical composer, half of the experimental project The Fireman, and composer for the New York City Ballet with last year’s classical work Ocean’s Kingdom. His newest adventure is Kisses On The Bottom which was released on Hear Music/Concord),a collection of standards beloved to Paul since childhood as well as two new McCartney compositions ‘My Valentine’ and ‘Only Our Hearts.’ Created with the help of Grammy Award-winning producer Tommy LiPuma and Diana Krall and her band—as well as guest appearances from Eric Clapton and Stevie Wonder—Kisses On The Bottom is the first record in McCartney’s historic oeuvre to feature him almost exclusively on vocals.

Since writing his first song at the age of 14, McCartney has always followed his own unique muse while changing the course of musical history. It’s borderline ludicrous to attempt to describe the past, present and future impact of The Beatles and their legendary albums Please Please Me, With The Beatles, A Hard Day’s Night, Beatles For Sale, Help!, Rubber Soul, Revolver, Sgt. Pepper’s Lonely Hearts Club Band, The Beatles (a/k/a The White Album), Yellow Submarine, Abbey Road and Let It Be—so suffice to say that The Beatles’ 1 compilation was the biggest selling album of the first new millennial decade of 2000-2010.

Paul’s output through the ‘70s to the present has been one of unflagging energy and influence, debuting as a solo artist with 1970’s timeless McCartney followed by 1971’s rustic classic RAM by Paul and Linda McCartney,then with Wings efforts including the currently Grammy-nominated Band On The Run, Venus and Mars, Wings at The Speed Of Sound and London Town, and following that as a solo artist again, with highlights including the ahead-of-its-time 1980 reinvention McCartney II, 1982’s Tug Of War, 1989’s Flowers In The Dirt, 1997’s Flaming Pie, 2005’s Chaos And Creation In The Backyard and 2007’s Memory Almost Full.  In 2008, The Fireman, his collaborative project with revered producer Youth, released Electric Arguments, which generated rave reviews, yielded a live favorite of the current McCartney set list in ‘Sing The Changes,’ and topped the Billboard Independent Album Charts.

A 14-time Grammy winner and recipient of The Recording Academy’s Lifetime Achievement and Trustees Awards, McCartney’s list of accolades reads like no other: 2012 will see Paul adding MusiCares Person of the Year to this unrivalled list when this special award is presented to him on February 10. It will recognize both his incomparable creative achievements and his lifelong commitment to charitable work, which includes decades’ worth of philanthropic activities for PETA, LIPA, One Voice, The Vegetarian Society, Nordoff Robins and Adopt-A-Mine-Field—not to mention his participation in historic benefit concerts including Live Aid in 1985, The Concert for New York City in 2001, and Live 8 in 2005.

McCartney’s many other citations have included the 2008 Brit award for Outstanding Contribution to Music, an honorary doctorate of music from Yale University, his 1999 induction into the Rock & Roll Hall of Fame, and of course being knighted in in 1996 by Queen Elizabeth II for his services to music. He is the first-ever British recipient of the prestigious Gershwin Prize For Popular Song.  He is also a Kennedy Center Honoree.

2012 and, as ever, brings an infinite set of new possibilities for Paul McCartney. If any new musical frontier awaits—be it an entirely new musical medium or genre, a city or song he’s never played before, or something the cleverest among us has yet to imagine–rest assured Paul is already on his way there…

For more information and to view who shares a star with Paul McCartney on the Hollywood Walk of Fame, visit www.walkoffame.com 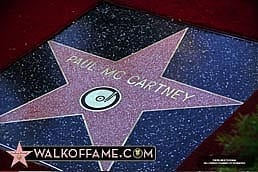