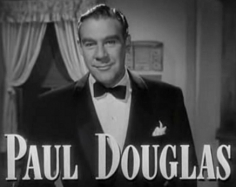 Paul Douglas was an American actor. Born in Philadelphia, Pennsylvania as Paul Douglas Fleischer, he may be best-remembered by many for two baseball comedy movies, Angels in the Outfield and It Happens Every Spring. He also played Richard Widmark’s police partner in the thriller Panic in the Streets, frustrated newlywed Porter Hollingsway in A Letter to Three Wives, Sgt. Kowalski in The Big Lift, businessman Josiah Walter Dudley in Executive Suite and a con man turned monk in When in Rome. In 1950, Douglas was host of the 22nd annual Academy Awards. Douglas also worked on radio as the announcer for The Ed Wynn Show and he was the first host of NBC Radio’s “Horn & Hardart

Douglas was cast in the 1959 episode of The Twilight Zone called “The Mighty Casey”, a role written for him by Rod Serling, based on his character in Angels in the Outfield, but Douglas died the same week the episode was to be filmed. His role was taken over by Jack Warden.

He was married five times, last to actress Jan Sterling from 1950 until his death. They had a son, Adams Douglas .