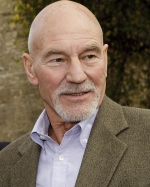 Sir Patrick Hewes Stewart, OBE is an English film, television and stage actor, and university Chancellor. He has had a distinguished career in theatre and television for around half a century. He is most widely known for his television and film roles, as Captain Jean-Luc Picard in and as Professor Charles Xavier in the X-Men films.

Stewart was born on 13 July 1940 in Mirfield near Dewsbury in the West Riding of Yorkshire, England, the son of Gladys, a weaver and textile worker, and Alfred Stewart, a Regimental Sergeant Major in the British Army who served with the King’s Own Yorkshire Light Infantry and previously worked as a general labourer and as a postman. Stewart said this of his father: “My father was a very potent individual, a very powerful man who got what he wanted. It was many, many years before I realised how my father inserted himself into my work. I’ve grown a moustache for Macbeth. My father didn’t have one, but when I looked in the mirror just before I went on stage I saw my father’s face staring straight back at me.” Throughout childhood, he endured poverty and disadvantage, an experience which influenced his later political and ideological beliefs. In 2006, Stewart made a short video against domestic violence for Amnesty International, in which he recollected his father’s physical attacks on his mother and the effect it had on him as a child, and he has given his name to a scholarship at the University of Huddersfield, where he is Chancellor, to fund post-graduate study into domestic violence. His childhood experiences also led him to become the patron of Refuge, a UK charity for abused women. He attended Crowlees C of E Junior and Infants School. He attributes his acting career to an English teacher named Cecil Dormand who then “put a copy of Shakespeare in my hand said, ‘Now get up on your feet and perform'”. In 1951, aged 11, he entered Mirfield Secondary Modern School, where he continued to study drama.

At age 15, Stewart dropped out of school and increased his participation in local theatre. He acquired a job as a newspaper reporter and obituary writer, but after a year, his employer gave him an ultimatum to choose acting or journalism. He quit the job. His brother tells the story that Stewart would attend rehearsals during work time and then invent the stories he reported. Stewart also trained as a boxer.

Following a period with the Manchester Library Theatre, he became a member of the Royal Shakespeare Company in 1966, staying with them until 1982. He was as an Associate Artist of the company in 1968. He appeared next to actors such as Ben Kingsley and Ian Richardson. In January 1967, he made his debut TV appearance on Coronation Street as a Fire Officer. In 1969, he had a brief TV cameo role as Horatio, opposite Ian Richardson’s Hamlet, in a performance of the gravedigger scene as part of episode six of Sir Kenneth Clark’s Civilisation television series. He made his Broadway debut as Snout in Peter Brook’s legendary production of A Midsummer Night’s Dream, then moved to the Royal National Theatre in the early 1980s. Stewart said of his experiences: “I remember that the actors were bused every night to Brooklyn–we couldn’t make our own way to the theatre. At that time, it was not possible for British actors to be wandering the streets. We were, all of us, dazzled by the enthusiasm that the audience brought. Until the Macbeth, it was probably the biggest smash I had ever been in.” Over the years, Stewart took roles in many major television series without ever becoming a household name. He appeared as Lenin in Fall of Eagles; Sejanus in I, Claudius; Karla in Tinker, Tailor, Soldier, Spy and Smiley’s People; Claudius in a 1980 BBC adaptation of Hamlet. He even took the romantic male lead in the BBC adaptation of Mrs Gaskell’s North and South .