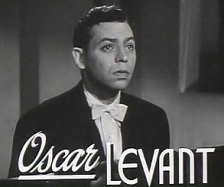 Oscar Levant was an American pianist, composer, author, comedian, and actor. He was more famous for his mordant character and witticisms, on the radio and in movies and television, than for his music.

Born in Pittsburgh, Pennsylvania to an Orthodox Jewish family from Russia, Levant moved to New York with his mother, Annie, in 1922, following the death of his father, Max. He began studying under Zygmunt Stojowski, a well-established piano pedagogue. In 1924, aged 18, he appeared with Ben Bernie in a short film, Ben Bernie and All the Lads, made in New York City in the DeForest Phonofilm sound-on-film system.

In 1928, Levant traveled to Hollywood where his career took a turn for the better. During his stay, he met and befriended George Gershwin. From 1929 to 1948 he composed the music for more than twenty movies. During this period, he also wrote or co-wrote numerous popular songs that made the Hit Parade, the most noteworthy being “Blame It on My Youth”, now considered to be a standard.

Around 1932, Levant began composing seriously. He studied under Arnold Schoenberg and impressed him sufficiently to be offered an assistantship. His formal studies led to a request by Aaron Copland to play at the Yaddo Festival of contemporary American music on April 30 of that year. Successful, Levant began on a new orchestral work, a sinfonietta. He married actress Barbara Woodell; they divorced in 1932.