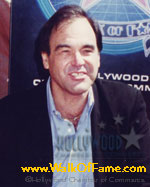 William Oliver Stone is an American film director and screenwriter. Stone came to prominence in the late 1980s and the early 1990s for directing a series of films about the Vietnam War, in which he had himself participated as an American infantry soldier. His work has earned him three Academy Awards, and continues to focus frequently on contemporary political and cultural issues, often controversially. His first Academy Award was for Best Adapted Screenplay for Midnight Express. He subsequently won Academy Awards for Directing Platoon and Born on the Fourth of July, both of which were centered on the Vietnam War. He has been described, by the British newspaper The Guardian as “one of the few committed men of the left working in mainstream American cinema.

A notable feature of Stone’s directing style is the use of many different cameras and film formats, from VHS to 8 mm film to 70 mm film. He sometimes uses several formats in a single scene, as in Natural Born Killers and JFK. Stone was born in New York City, the son of Jacqueline and Louis Stone, a stockbroker. He grew up affluently and lived in townhouses in Manhattan and Stamford, Connecticut. His father was Jewish and his mother a Roman Catholic of French birth, and Stone was raised an Episcopalian as a compromise. Stone attended Trinity School before his parents sent him away to attend The Hill School, a college-preparatory school in Pottstown, Pennsylvania. His mother was often absent and his father made a big impact on his life; father-son relationships were to feature heavily in Stone’s films. His parents divorced when he was 15, due to his father’s extramarital affairs with the wives of several family friends. Stone’s father was also influential in obtaining jobs for his son, including work on a financial exchange in France, where Stone often spent his summer vacation with his maternal grandparents – a job that proved inspirational to Stone for his movie Wall Street. Stone graduated from The Hill School in 1964.

Stone was then admitted into Yale University, but left after one year. Stone had become inspired by Joseph Conrad’s novel Lord Jim as well as by Zorba the Greek and George Harrison’s music to teach English at the Free Pacific Institute in South Vietnam. Stone taught in Vietnam for six months after which he worked as a wiper on a United States Merchant Marine ship, travelling to Oregon and Mexico, before returning to Yale, where he dropped out a second time. In September 1967 he enlisted in the United States Army, requesting combat duty in Vietnam. He fought with the 25th Infantry Division, then with the First Cavalry, earning a Bronze Star and a Purple Heart with an Oak Leaf Cluster before his discharge in 1968 after 15 months. While at Yale, Stone and friend Lloyd Kaufman worked on an early Troma Entertainment comedy The Battle of Love’s Return. Both also acted in the movie, Stone in a cameo role. Stone graduated from film school at New York University in 1971. Stone was the recipient of the Extraordinary Contribution to Filmmaking Award at the 2007 Austin Film Festival.