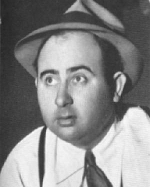 Norman Rae Taurog was an American film director and screenwriter.

Between 1920 and 1968, Taurog directed over 140 films, and directed Elvis Presley in more movies than any other director. He won the 1931 Academy Award for Best Director for the film Skippy and still holds the record as the youngest director to win it. He was later nominated for Best Director for the 1938 film, Boys Town. For his contribution to the motion picture industry, Norman Taurog has a star on the Hollywood Walk of Fame at 1600 Vine Street.

It could be said that Norman Taurog had five chapters to his career. His first was as a child performer on the stage from an early age, making his movie debut aged 13 in the short film Tangled Relations, produced by Thomas Ince’s studios. In the eight years until his next screen credit, he worked in theatre, mostly off-Broadway.

By the time he re-entered the movie industry, he made the transition to director. He collaborated with Larry Semon in 1920’s The Sportsman. Taurog made 42 more films, mostly shorts, up until 1931; in this period, he developed his style, his forte being light comedy, though he could also deal with drama and maintain complex narratives.