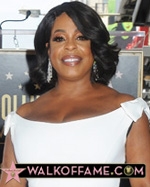 The Hollywood Chamber of Commerce is proud to announce that actress Niecy Nash was honored today with the 2,639th star on the Hollywood Walk of Fame on Wednesday, July 11, 2018 at 11:30 a.m. PDT. The star was dedicated in the category of Television at 6201 Hollywood Boulevard in front of Eastown.

“Niecy Nash is one exceptional star who grabs your attention with her antics and great personality! She embodies characters that everyone can relate to and appeals to fans around the world,” said Ana Martinez, Producer of the Walk of Fame ceremonies. “We are proud to have her as part of our historic Walk of Fame!”

Helping Emcee Leron Gubler, President & CEO of the Hollywood Chamber of Commerce, unveil the star will be Cedric “The Entertainer” and Ryan Murphy.

Niecy Nash is a native of Los Angeles. She began her career in the film, Boys on the Side starring Whoopi Goldberg. At the time, she had no manager or agent and pushed herself into the audition. It is said that chutzpah and drive is what started her career in show business.

Nash is a multi-talented Emmy®-winning producer and twice-nominated actress. Her multifaceted career includes roles in HBO’s Getting On, which has earned her two Emmy nominations, FOX’s Scream Queens, Showtime’s Masters of Sex and TV Land’s The Soul Man. Nash is also headlining the new dramedy series Claws on TNT which was just picked up for a third season.

Nash was the host and producer of the Style Network’s home makeover show, Clean House, which became the network’s No. 1 program. Her work earned her two Daytime Emmy® nominations, and The American Women in Radio & Television honored Nash with the 2007 Gracie Allen Award for Outstanding Program Host. In addition, Nash was seen regularly as a celebrity panelist on the top-rated entertainment news program The Insider on CBS.

Nash is well-known for her role as no-nonsense Officer Raineesha Williams on the hilarious Comedy Central hit, Reno 911! a half-hour unscripted spoof of Cops that aired for six seasons. The show was so popular, it was spun-off into a feature film, Reno 911: Miami, in 2007. Nash went on to star in her own FOX comedy series, Do Not Disturb, opposite Jerry O’Connell, in 2008.

Nash has had featured roles in the films Guess Who, opposite Bernie Mac and Ashton Kutcher; Code Name: The Cleaner, opposite Cedric the Entertainer and Lucy Liu; Not Easily Broken, based on the best-selling book by Bishop T.D. Jakes; and the Walt Disney Pictures summer blockbuster release G-Force, produced by Jerry Bruckheimer.

Nash’s television credits are another testament to her talent. Her style, humor and quick wit garnered her a stint as a correspondent on NBC’s The Tonight Show with Jay Leno. She is also well known for her recurring role on the Peabody Award-winning comedy series The Bernie Mac Show, portraying Bernie’s uproarious baby sister, Benita. Other recurring roles include TV’s Presidio Med, That’s Life, Popular, and City of Angels. Also included on her resume are guest-starring roles on such top-rated series as My Name Is Earl, Monk, CSI: Crime Scene Investigation, Girlfriends, NYPD Blue, That’s So Raven, One on One, Judging Amy and Reba.

In her rare spare time, she is devoted to church and participating at charitable functions in support of causes that are close to her heart, including the prevention and awareness of HIV/AIDS, breast cancer, school violence and domestic abuse, among others.