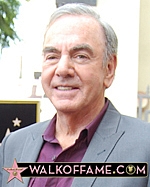 See the live ceremony here at the end of  this page.

The Hollywood Chamber of Commerce proudly dedicated a Walk of Fame star for legendary singer/songwriter Neil Diamond today, August 10, 2012. “We finally were able to pin him down for a date to dedicate his star. This is one busy man and we are thrilled to honor this legendary performer,” stated Walk of Fame producer Ana Martinez.

Neil Diamond’s eclectic and universally beloved songs—as well as his charismatic and openhearted performances of them—continue to make him an international force both as a record maker and a live entertainer as he continuously sells out major arenas and venues around the world.  Diamond has a remarkable track record of 16 Top Ten albums and 37 Top Ten singles.  This Grammy-winning artist rock icon has been a Kennedy Center honoree, inducted into the Rock and Roll Hall of Fame and Songwriter’s Hall of Fame and is a recipient of the Sammy Cahn Lifetime Achievement Award. Among Diamond’s many other notable honors, he has received a Golden Globe Award, thirteen Grammy nominations and was named the 2009 MusiCares Person of the Year.

This man, who has already sold more than 125 million records around the world, was raised in Brooklyn, New York. After attending high school—where he sang in the school choir with future duet partner Barbra Streisand, Diamond went on to study at New York University as a pre-med student on a fencing scholarship.

Ultimately it was Diamond’s overriding, lifelong passion for making music that would trump his interest in fencing or the healing arts.  So Diamond put down his sword and scalpel, picked up his trusty guitar and left NYU just short of graduation, putting everything on the line to pursue his dream of writing songs for a living.

Diamond caught the eye of top songwriting team Ellie Greenwich and Jeff Barry, who were among the hottest songwriters in the world at the time, having co-written such classics as “Be My Baby,” “Da Doo Ron Ron,” “And Then He Kissed Me,” “Chapel of Love” and “River Deep, Mountain High,” as well as “Hanky Panky” and “Leader of The Pack.”

Soon Diamond was meeting with Jerry Leiber and Mike Stoller who were the owners of the publishing company that Barry and Greenwich were writing for.  Before he knew it, he had a one year contract to write for their company with a guaranteed salary of $150 a week!

One year later—having written what he himself calls “maybe half a dozen mediocre songs,” Diamond was let go from his contract with Leiber and Stoller.  Teaming with Barry and Greenwich, Diamond formed a publishing company to own the copyrights to his songs and pursued a record deal as a recording artist. Jerry Wexler of Atlantic Records heard something in Diamond and offered him a deal with one of Atlantic’s new labels, Bang Records.

Fittingly, Diamond’s career now took off with a real bang, as he came into his own with a series of hits that began with “Solitary Man”—a song that would forever define his persona as a singular figure in music. As an American solo artist during a time when British groups were all the rage in the wake of Beatlemania, Diamond stood out from the pack.

Diamond’s next hit, was “Cherry, Cherry.” Suddenly, Diamond found himself in great demand as an artist and a songwriter, especially after the Monkees had #1 and #2 hits, respectively, with his compositions “I’m A Believer” and “Little Bit Me. Little Bit You.” Many more hits like “Girl, You’ll Be A Woman Soon,” “Thank The Lord For The Night Time” and “Kentucky Woman” would follow during Diamond’s two years recording for Bang, but ultimately when the label refused to release his powerfully introspective song “Shilo” as a single, he would choose to leave the company and New York behind, signing to MCA’s Uni Records in Los Angeles where he was assured the sort of artistic freedom he sought.

Over the next five years, Diamond would further demonstrate his growing musical range as he recorded some of his greatest and most beloved compositions ever, including such popular standards as “Brooklyn Roads, “Sweet Caroline, “ “Brother Love’s Traveling Salvation Show,” “Cracklin’ Rose,”  “I Am. . . I Said” and “Song Sung Blue.”   In the summer of 1971, Diamond had played seven sold-out nights at the famed Greek Theatre in Los Angeles to a rapturous reception.

The following August, he returned for ten more sold-out shows, an event forever captured on the multi-platinum Hot August Night, a double-record set that demonstrated once and for all Diamond’s growing status as a superstar concert sensation. The Hot August Night 40th Anniversary Deluxe Edition was recently released last month.

In 1977, Diamond returned to the Greek Theatre to record Love At The Greek, another massively popular live album, with a successful TV special of the performance to follow. That same year, the I’m Glad You’re Here With Me Tonight album would bring the world another one of Diamond’s biggest hits ever—“You Don’t Bring Me Flowers”—which was re-recorded as a globally popular duet with Barbara Streisand. After releasing 1979’s September Morn, Diamond would kick off the Eighties with The Jazz Singer, the multi-platinum soundtrack to his big screen debut that found Diamond co-starring with Lawrence Olivier and Lucie Arnaz. The Jazz Singer album also spotlighted three of Diamond’s most popular songs ever—“Hello Again,” “Love On The Rocks” and “America,” the very American standard inspired by the journey made by Diamond’s own grandparents.

In  2005, Diamond released 12 Songs, his first album with acclaimed rock producer Rick Rubin.  The album entered the charts at #4, which at the time, was Diamond’s highest-ever debut on the BillboardTop 200.  This album, as well as his 2008 release of Home Before Dark, his second effort with Rubin, garnered some of the best reviews of his life.  Home Before Dark also debuted at #1 on the Billboard charts…Diamond’s first ever #1 debut.   With 12 Songs and Home Before Dark, Diamond renewed himself artistically and earned yet another new generation of listeners to whom his timeless classics still speak as loudly as his newest creations.

Currently Diamond is on his 2012 US summer tour.  For ticket information please go to www.NeilDiamond.com. 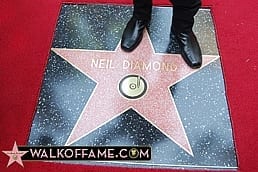