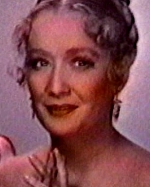 Miriam Hopkins was an American actress known for her versatility in a wide variety of roles.

Born as Ellen Miriam Hopkins in Savannah, Georgia, she was raised in Bainbridge, a town in the state’s southwest near the Alabama border. She attended a finishing school in Vermont and later Syracuse University in New York.

At the age of 20, she became a chorus girl in New York City. In 1930, she signed with Paramount Pictures, and made her official film debut in Fast and Loose. Her first great success was in Ernst Lubitsch’s Trouble in Paradise, where she proved her charm and wit as a beautiful and jealous pickpocket. During the remainder of the decade, she appeared in such films as The Smiling Lieutenant and Dr. Jekyll and Mr. Hyde, Design for Living, Becky Sharp, for which she was nominated for the Academy Award for Best Actress, Barbary Coast, These Three and The Old Maid. Hopkins rejected the role of Ellie Andrews in It Happened One Night, The role went to Claudette Colbert and resulted in an Academy Award.

Hopkins had well-publicized fights with her arch-enemy Bette Davis, when they co-starred in their two films The Old Maid and Old Acquaintance. Davis admitted to enjoying very much a scene in Old Acquaintance in which she shakes Hopkins hand. There were even press photos taken with both divas in boxing rings with gloves up and director Vincent Sherman between the two.