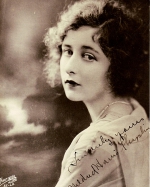 Mildred Harris was an American film actress. Harris began her career in the film industry as a popular child actress at age eleven. At the age of fifteen, she was cast as a harem girl in D. W. Griffith’s Intolerance. She appeared as a leading lady through the 1920s but her career slowed with the advent of the “talkies”. She was critically praised for No, No Nanette in 1930, had a few bit parts in the early 1940s, and made her last appearance in the posthumously released Having A Wonderful Crime of 1945.

Harris has a star on the Hollywood Walk of Fame at 6307 Hollywood Blvd. in Los Angeles, California. In 1992, she was portrayed by Milla Jovovich in the biographical film Chaplin.

Born in Cheyenne, Wyoming, Harris made her first screen appearance at the age of eleven in the 1912 Francis Ford and Thomas H. Ince-directed Western short The Post Telegrapher. She followed the film with various juvenile roles, often appearing opposite child actor Paul Willis. In 1914, she was hired by The Oz Film Manufacturing Company to portray Fluff in The Magic Cloak of Oz and Button-Bright in His Majesty, the Scarecrow of Oz. In 1916, at the age of 15, she appeared as a harem girl in Griffith’s epic Intolerance.

In the 1920s, Harris graduated to leading lady roles opposite leading men such as Conrad Nagel, Milton Sills, Lionel Barrymore, Rod La Rocque and the Moore brothers, Owen and Tom. She appeared in Frank Capra’s 1928 silent drama The Power of the Press with Douglas Fairbanks, Jr. and Jobyna Ralston.