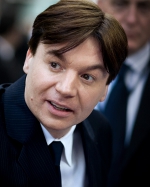 Michael John "Mike" Myers is a British Canadian actor, comedian, screenwriter, and film producer. He was a long-time cast member on the NBC sketch show Saturday Night Live in the late 1980s and the early 1990s and starred as the title characters in the films Wayne's World, Austin Powers, and Shrek.

Myers was born and raised in Scarborough, Ontario, Canada, the son of Alice E., an office supervisor who was formerly in the Royal Air Force, and Eric Myers, who worked in the insurance business and previously was a Royal Engineer in the British Army. Both of his parents are from Liverpool, England. He has two older brothers, Peter and Paul Myers, the latter of whom is an indie rock singer-songwriter, broadcaster and author. Myers is of English, Scottish, and Irish ancestry, and was raised Protestant.

He attended Sir John A. Macdonald Collegiate Institute but then changed schools and went to Stephen Leacock Collegiate Institute in Scarborough, Ontario. He began working in commercials at age eight, and at ten he made a commercial for British Columbia Hydro Electric with Gilda Radner playing his mother. He was a very popular person in his school. During high school, to make girls laugh, he would go into the Wayne?s World character that later came to be known as Wayne Campbell. The day he finished his high school finals he joined Second City Theatre. Later, he left Second City to tour Britain with comedian Neil Mullarkey.