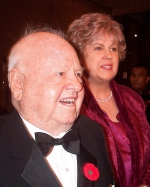 Mickey Rooney is an American film actor and entertainer whose film, television, and stage appearances span nearly his entire lifetime. During his career he has won multiple awards, including an Honorary Academy Award, a Golden Globe and an Emmy Award. Working as a performer since he was a small child, he was a superstar as a teenager for the films in which he played Andy Hardy, and he has had one of the longest careers of any actor.

Rooney was born in Brooklyn, New York, to a vaudeville family. His father, Joseph Yule, was from Scotland, and his mother, Nellie W., was from Kansas City, Missouri. Both parents were in vaudeville, and appearing in a Brooklyn production of A Gaiety Girl when Joseph, Jr. was born. He began performing at the age of 17 months as part of his parents' routine, wearing a specially tailored tuxedo.

The Yules separated in 1924 during a slump in vaudeville, and in 1925, Nell Yule moved with her son to Hollywood, where she managed a tourist home. Fontaine Fox had placed a newspaper ad for a dark-haired child to play the role of "Mickey McGuire" in a series of short films. Lacking the money to have her son's hair dyed, Mrs. Yule took her son to the audition after applying burnt cork to his scalp. Joe got the role and became "Mickey" for 78 of the comedies, running from 1927 to 1936, starting with Mickey's Circus, released September 4, 1927. These had been adapted from the Toonerville Trolley comic strip, which contained a character named Mickey McGuire. Joe Yule briefly became "Mickey McGuire" legally in order to trump an attempted copyright lawsuit. Rooney later claimed that, during his Mickey McGuire days, he met cartoonist Walt Disney at the Warner Brothers studio, and that Disney was inspired to name Mickey Mouse after him, although Disney always said that he had changed the name from "Mortimer Mouse" to "Mickey Mouse" on the suggestion of his wife.