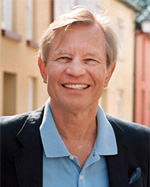 Michael York, OBE is an English actor. He is more recently known among mainstream audiences for his role as Basil Exposition in the Austin Powers series of comedy films.

York was born in Fulmer, Gerrards Cross, Buckinghamshire, the son of Florence Edith May, a musician; and Joseph Gwynne Johnson, a Llandovery born Welsh ex-Royal Artillery British Army officer and executive with Marks and Spencer department stores. York has an older sister, Penelope Anne and younger twin sisters, Caroline and Bridget but Bridget died a few hours after birth, according to his autobiography. He was brought up in Burgess Hill, Sussex. During his teenage years, York was educated at Bromley Grammar School for Boys, Bromley, London and at Oxford University. He began his career in a 1956 production of The Yellow Jacket. In 1959 he made his West End debut with a brief part in a production of Hamlet.

Prior to graduating with a degree in English from the University of Oxford in 1964, York had toured with the National Youth Theatre, also performing with the Oxford University Dramatic Society and the University College Players. After some time with the Dundee Repertory Theatre, York joined the National Theatre where he worked with Franco Zeffirelli during the 1965 staging of Much Ado About Nothing.

York made his film debut as Lucentio in Zeffirelli’s The Taming of the Shrew, then was cast as Tybalt in Zeffirelli’s 1968 film adaptation of Romeo and Juliet with Leonard Whiting and Olivia Hussey. He also starred in an early Merchant Ivory Productions film, The Guru. He played an amoral bisexual drifter in Harold Prince’s film Something for Everyone opposite Angela Lansbury as the countess who hires York as her footman. He then went on to portray the bisexual Brian Roberts in Bob Fosse’s film version of Cabaret, opposite Liza Minnelli. In 1977 reunited with Zeffirelli as a fiery John the Baptist in Jesus of Nazareth.