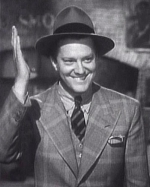 Michael O'Shea was an American character actor whose career spanned from the 1940s-1960s. Unlike his five brothers who became policemen, O'Shea dropped out of school at 12 and began his acting career in vaudeville by touring with boxing idol Jack Johnson's show.

Much like his character from Lady of Burlesque, Biff Brannigan, O'Shea was a comedian and emcee at speakeasies. He put together his own dance band, "Michael O'Shea and His Stationary Gypsies", and later broke into radio and the "legitimate" stage, where he was billed for a time as "Eddie O'Shea". His performance in the 1942 play The Eve of St. Mark led to a string of film roles in the 40s, which included a memorable performance as Barbara Stanwyck's boyfriend comic in Lady of Burlesque. He also received great reviews in 1944 when he reprised his stage role of Private Thomas Mulveray in the film version of The Eve of St. Mark.

After his career in film waned?he was largely out of films by 1952?he took many roles in television. He acted in TV programs such as Ethel Barrymore Theater, Damon Runyon Theater, Schlitz Playhouse of Stars, The Revlon Mirror Theater, and Daktari. He also starred in the television series It's a Great Life from 1954-1956 as Denny Davis, a former GI trying to find a civilian job.

In the 1960s, O'Shea became a plainclothes operative for the CIA after retiring from show business.