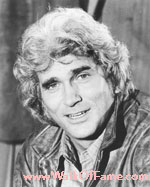 Michael Landon was an American actor, writer, director, and producer, who starred in three popular NBC TV series that spanned three decades. He is widely known for his roles as Little Joe Cartwright in Bonanza, Charles Ingalls in Little House on the Prairie, and Jonathan Smith in Highway to Heaven. Landon appeared on the cover of TV Guide twenty-two times, second only to Lucille Ball. His twenty-eight years of full-hour television acting surpasses that of TV legends Lucille Ball and James Arness.

Landon produced, wrote, and directed many of his series’ episodes, including his shortest-lived production, Father Murphy, which starred his friend and “Little House” co-star Merlin Olsen. In 1981, Landon won recognition for his screenwriting with a Spur Award from the Western Writers of America. Although his youngest daughter Jennifer Landon and Bonanza co-star David Canary, have both won multiple Emmys, Michael Landon was never given the honor.

In 1976 Landon wrote and directed an auto-biographical movie, The Loneliest Runner, and was nominated for two Emmys. He also hosted the annual long-running coverage of the Tournament of Roses Parade with Kelly Lange, also on NBC.

Michael Landon was born Eugene Maurice Orowitz in Forest Hills, a neighborhood of Queens, New York. Landon’s father, Eli Maurice Orowitz, was a Jewish American actor and movie theater manager, and his mother, Peggy O’Neill, was an Irish American Catholic dancer and comedienne. Eugene was the Orowitz’ second child; his sister, Evelyn, was born three years earlier. In 1941, when Orowitz was four years old, he and his family moved to the Philadelphia suburb of Collingswood, New Jersey, where he attended and celebrated his Bar Mitzvah at Temple Beth Shalom, a Conservative synagogue, in Haddon Heights, an area that did not allow Jews until after World War II. His family recalls that Landon “went through a lot of hassle studying for the big event, which included bicycling to a nearby town every day to learn how to read Hebrew and do the chanting.” He later attended Collingswood High School.