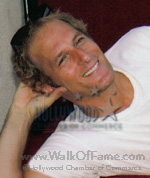 Michael Bolton is an American singer-songwriter and a former hard rock singer. He is best known for his soft rock ballads and tenor vocals.

His achievements include selling many albums, eight top ten albums, two number one singles on the Billboard charts, and awards from both the American Music Awards and Grammy Awards.

He was born to Jewish parents George and Helen Bolotin in New Haven, Connecticut. The couple had three children: two sons and a daughter.

Bolton began recording in 1975. This first album was self-titled using his original surname, Bolotin. Early in his musical career, he focused on hard rock. His band, Blackjack, once toured with heavy metal singer Ozzy Osbourne.


PRESENTED BY The Hollywood Chamber of Commerce

Copyright Hollywood Walk Of Fame. All Rights Reserved.
Ada Accessibility
MADE WITH BY WP HARBOR