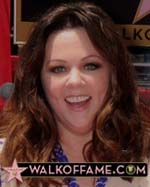 The Hollywood Chamber of Commerce honored actress Melissa McCarthy with the 2,552nd star on the Hollywood Walk of Fame today, on May 19, 2015. The star in the category of Motion Pictures was dedicated in front of the historic TCL Chinese Theatre IMAX at 6927 Hollywood Boulevard. “Hollywood is thrilled to honor Melissa McCarthy with this coveted award. Her ability to portray unique, unforgettable and exuberant characters sets her apart,” stated Leron Gubler, President/CEO of the Hollywood Chamber of Commerce and emcee of the event. “She is one of America’s favorite comedic actresses and very deserving of this honor!” The star ceremony was streamed live exclusively on www.walkoffame.com.

A native of Illinois, Melissa McCarthy first made her mark on the comedy stage performing stand-up in New York at The Duplex, The Improv, and Stand-Up New York. At the same time, she studied the Meisner Technique under Michael Harney and then continued her dramatic training at The Actors Studio. Melissa starred in a variety of stage productions throughout the city. In Los Angeles, Melissa spent nine years as a main-stage member of the world renowned improv and sketch comedy troupe The Groundlings.

McCarthy received an Academy Award nomination for her role as Megan in the worldwide hit comedy Bridesmaids, a film directed by Paul Feig and produced by Judd Apatow. She also received BAFTA, Critics’ Choice, and SAG Award nominations for this role and won the MTV Movie Award for Comedic Performance of the Year.

In 2014, McCarthy starred opposite Bill Murray in St. Vincent, for which she received a Critics’ Choice Award nomination, and in Tammy which she co-wrote with her actor/writer husband Ben Falcone, who also served as the film’s director. She received a People’s Choice Award for this role. Her previous film credits include The Heat opposite Sandra Bullock for Director Paul Feig, Identity Thief alongside Jason Bateman, This is 40 for Director Judd Apatow, and Todd Phillip’s The Hangover Part III. McCarthy will next be seen in FOX’s action comedy Spy, in which she plays an unlikely desk-bound CIA agent turned super spy. The film, directed by Paul Feig, will be released nationwide on June 5th.

On television, McCarthy starred as the clumsy culinary genius Sookie St. James in “Gilmore Girls” and Dena in the series “Samantha Who?” McCarthy won an Emmy Award for starring as Molly on the hit CBS comedy “Mike & Molly” and has directed several episodes. She has also received Emmy nominations for guest hosting “Saturday Night Live,” which she has hosted three times.

The Hollywood Walk of Fame is an internationally-recognized Hollywood icon. With approximately 24 star ceremonies annually broadcast around the world, the constant reinforcement provided to the public has made the Walk of Fame a top visitor attraction. The Hollywood Chamber of Commerce continues to add stars on the Walk of Fame as the representative of the City of Los Angeles. The Walk of Fame is a tribute to all of those who worked diligently to develop the concept and to maintain this world-class tourist attraction. The Walk of Fame is open to the public. No paid admission or assigned seating at star ceremonies.It is understood that the cost of installing a star on the Walk of Fame upon approval is $30,000 and the sponsor of the nominee accepts the responsibility for arranging for payment to the Hollywood Historic Trust, a 501(c)3 charitable foundation. The funds are used to pay for the creation/installation of the star and ceremony, as well as maintenance of the Walk of Fame. Download the official app for iPhones and Android devices at http://officialhollywoodwalkoffameapp.com. 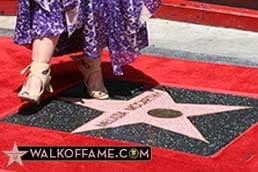