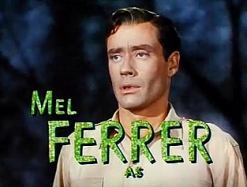 Ferrer was born Melchor Gastón Ferrer in Elberon, New Jersey, of Spanish and Irish descent. His father, Dr. José María Ferrer, was born in Cuba, was an authority on pneumonia and served as chief of staff of St. Vincent’s Hospital in New York City. His American mother, the former Mary Matilda Irene O’Donohue, was a daughter of coffee broker Joseph J. O’Donohue, New York’s City Commissioner of Parks, a founder of the Coffee Exchange, and a founder of the Brooklyn-New York Ferry. An ardent opponent of Prohibition, Irene Ferrer was named, in 1934, the New York State chairman of the Citizens Committee for Sane Liquor Laws.

Ferrer had three siblings. His elder sister was Dr. M. Irené Ferrer, a cardiologist and educator, who helped refine the cardiac catheter and electrocardiogram. His brother, Dr. Jose M. Ferrer, was a surgeon. His other sister, Teresa Ferrer, was the religion editor of The New York Herald Tribune and education editor of Newsweek. The family is not related to actors José or Miguel Ferrer.