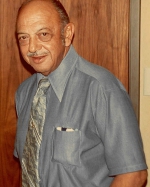 Mel Blanc was an American voice actor and comedian. Although he began his nearly six-decade-long career performing in radio commercials, Blanc is best remembered for his work with Warner Bros. during the “Golden Age of American animation” as the voice of such well-known characters as Bugs Bunny, Daffy Duck, Porky Pig, Sylvester the Cat, Tweety Bird, Foghorn Leghorn, Yosemite Sam, Wile E. Coyote, Woody Woodpecker, Barney Rubble, Mr. Spacely, Speed Buggy, Captain Caveman, Heathcliff, and hundreds of others. Having earned the nickname ?The Man of a Thousand Voices,? Blanc is regarded as one of the most influential people in the voice-acting industry.

Blanc was born Melvin Jerome Blank in San Francisco, California, to Jewish-American parents, Frederick and Eva Blank. He grew up in Portland, Oregon, attending Lincoln High School. He claimed that when he was 16, he changed the spelling from ?Blank? to ?Blanc? because a teacher told him that he would amount to nothing and be, like his name, a ?blank.? Blanc joined The Order of DeMolay as a young man, and was eventually inducted into its Hall of Fame.

Blanc began his radio career in 1927 as a voice actor on the KGW program The Hoot Owls, where his ability to provide voices for multiple characters first attracted attention. He moved to KEX in 1933 to produce and host his Cobweb And Nuts show, which debuted on June 15. The program played Monday through Saturday from 11:00 pm to midnight, and by the time the show ended two years later, it appeared from 10:30 pm to 11:00 pm.