Maurice-Alexis Jarre was a French composer and conductor.

Although he composed several concert works, he is best known for his film scores, and is particularly known for his collaborations with film director David Lean. Jarre composed the scores to all of Lean's films since Lawrence of Arabia. Other notable scores of his include The Message, Witness and Ghost. Jarre was awarded a star on the Hollywood Walk of Fame. Three of his compositions spent a total of forty-two weeks on the U.K. singles chart chart; the biggest hit was 'Somewhere My Love' by the Michael Sammes Singers, which reached number fourteen in 1966 and spent thirty-eight weeks on the chart.

Jarre was a three time Academy Award winner, for Lawrence of Arabia, Doctor Zhivago, and A Passage to India, all of which were directed by David Lean. He was Oscar nominated a total of eight times. 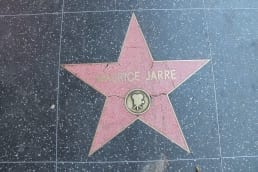