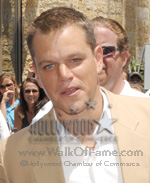 Matt Damon is an Academy Award-winning screenwriter and actor. He most recently starred in Martin Scorsese’s Oscar-winning Best Picture, The Departed with Leonardo DiCaprio, Jack Nicholson and Mark Wahlberg, and in Robert DeNiro’s dramatic thriller The Good Shepherd, with DeNiro and Angelina Jolie.

Damon can currently be seen in Oceans Thirteen along with George Clooney and Brad Pitt, and in director Paul Greengrass’ The Bourne Ultimatum, in which he reprises his role of Jason Bourne from the hit action thrillers The Bourne Identity and The Bourne Supremecy, on August 3.

In 2005, Damon starred with George Clooney in the geopolitical thriller Syriana. That same year, audiences also saw him in The Brothers Grimm, starring with Heath Ledger. He also recently reprised his roles as Linus Caldwell in Ocean’s Twelve for director Steven Soderbergh, and as Jason Bourne in the boxoffice hit The Bourne Supremacy, the second installment in the series following The Bourne Identity.

In 2004, Damon reprised his role as Jason Bourne in the box-office hit The Bourne Supremacy, the second installment in the series following The Bourne Identity. That same year, Damon starred with Greg Kinnear in the Farrelly Brothers comedy Stuck On You, and in 2002, in Gerry with Casey Affleck for director Gus Van Sant.

In 2000, audiences saw Damon star in The Legend of Bagger Vance, for director Robert Redford and in the film version of the Cormick McCarthy book All the Pretty Horses.

In 1999, Damon starred in The Talented Mr. Ripley, for which he received a Golden Globe nomination for Best Actor. That same year he rejoined Chasing Amy director Kevin Smith and pal Ben Affleck in Dogma, a film about a pair of outcast angels.

In 1998, he won an Academy Award for Best Original Screenplay with longtime friend Ben Affleck for the critically-acclaimed drama Good Will Hunting. Damon also earned an Academy Award nomination for Best Actor for his work in the title role. In addition, both he and Affleck received a Golden Globe Award for their screenplay, and Damon also garnered a Golden Globe nomination for his performance. The film, directed by Gus Van Sant, received seven additional Oscar nominations, including one for Best Picture and a win for Robin Williams for Best Supporting Actor.

In the same year, Damon starred in the title role of the World War II drama Saving Private Ryan for Academy Award-winning director Steven Spielberg, and in John Dahl’s Rounders.

In 1997, Damon made a cameo appearance in Chasing Amy. In the same year, he starred as an idealistic young attorney in Francis Ford Coppola’s The Rainmaker, based on the best-selling novel by John Grisham.

Damon first gained the public’s eye in 1996, when he gave a vivid performance in Courage Under Fire, in which he portrayed a guilt-ridden Persian Gulf War soldier tormented by an incident which happened in the heat of battle.

The versatile young actor made his feature film debut in 1988 in a small role in the critically well-received Mystic Pizza. He went on to play Brian Dennehy’s medical school dropout in the TV movie Rising Son (TNT, 1990) and gained further attention when he returned to the big screen as a fascist preppy in School Ties (1992).

For director Walter Hill, Damon enjoyed a sizeable supporting role as the green second lieutenant new to the West who narrates Geronimo: An American Legend (1993) and in 1995, he appeared in The Good Old Boys, directed by Tommy Lee Jones for TNT.