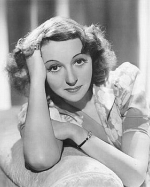 Mary Livingstone, was an American radio comedienne and the wife and radio partner of comedy great Jack Benny. Enlisted almost entirely by accident to perform on her husband’s popular program, she proved a talented comedienne. But she also proved one of the rare performers to experience severe stage fright years after her career was established ? so much so that she retired from show business completely, after two decades in the public eye, almost three decades before her death, and at the height of her husband and partner’s fame.

Seattle-born, but Vancouver, British Columbia- raised, her father was a Romanian immigrant. Sadie Marks herself came from a respected show business family: relatives included her cousins the Marx Brothers and Al Shean of Gallagher and Shean; her family name Marrix was Anglicised to Marks when the family arrived in the United States. She met her future husband at a Passover seder at her family home when she was 14; Benny was invited by his friend and her cousin, Zeppo Marx while Benny and the Marx Brothers were in town together to perform. Sadie developed a near-instant crush on the funny, somewhat shy man eleven years her senior. But when he inadvertently insulted her by excusing himself for the night in the midst of her violin performance, she got her revenge the next night. She took three girlfriends to the theater where Benny performed, sitting in the front row and making sure not to laugh. Benny said later it drove him nuts that he couldn’t get the four girls to laugh at anything.

Three years later, aged 17, Sadie visited California with her family while Jack Benny was in the same town for a show. Still nursing a small crush on the comedian, Sadie went to the theater to re-introduce herself to him. As he approached her in a hallway, she smiled and said, “Hello, Mr. Benny, I’m.” But he curtly cut her off with a “Hello,” and continued on his way down the hall without pausing; she learned much later that when Benny was deep in thought about his work, it was nearly impossible to get his attention otherwise.

They met again a few years later ? while she was said to be working as a lingerie salesgirl at a May Department Stores branch store in downtown Los Angeles ? and the couple finally began dating. Invited on a double-date by a friend who had married Sadie’s sister, Babe, Benny brought Sadie along to keep him company. This time, the couple clicked: Jack was finally smitten with Sadie and asked her on another date. She turned him down at first ? she was seeing another young man ? but Benny persisted. He visited her at The May Company almost daily and was reputed to buy so much ladies’ hosiery from her he helped her set a sales record; he also called her several times a day when on the road.