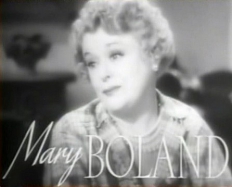 Mary Boland was an American stage and film actress.

Born Marie Anne Boland in Philadelphia, Pennsylvania, she was the daughter of William Boland, an actor, and his wife Mary Cecilia Hatton. She had an older sister named Sara.

Boland originally was in a convent but left and was performing on stage by the age of fifteen. She debuted on Broadway in 1907 in the play The Ranger with Dustin Farnum and had appeared in eleven Broadway productions, notably with John Drew, before making her silent film debut for Triangle Studios in 1915. She entertained soldiers in France during World War One then returned to America. After appearing in nine movies, she left filmmaking in 1920, returning to the stage and appearing in a number of Broadway productions. She became famous as a comedienne.

Boland’s greatest success on the stage in the 1920s was the comedy The Cradle Snatchers, in which she, Edna May Oliver, and Margaret Dale, having been abandoned by their husbands, take on young lovers. Boland’s paramour was Humphrey Bogart in one of his first roles.