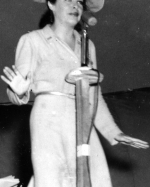 Martha Raye was an American comic actress and standards singer who performed in movies, and later on television.

Raye’s life as a singer and comedy performer began very early in her childhood. She was born at St. James Hospital, in Butte, Montana as Margy Reed, where her Irish immigrant parents, Peter F. Reed and Maybelle Hooper, were performing at a local vaudeville theatre as “Reed and Hooper”. Two days after Martha was born, her mother was already back on stage, and Martha first appeared in their act when she was three years old. She performed with her brother, Bud, and soon the two children became such a highlight that the act was renamed “Margie and Bud.” Some show business insiders speculated that the Judy Garland song from A Star Is Born, “I was born in a trunk in the Princess Theater in Pocatello, Idaho” was inspired by Raye’s beginnings.

Raye continued performing from that point on and even attended the Professional Children’s School in New York City, but she received so little formal schooling, getting only as far as the fifth grade, that she often had to have scripts and other written documents read to her by others.

In the early 1930s, Raye was a band vocalist with the Paul Ash and Boris Morros orchestras. She made her first film appearance in 1934 in a band short titled A Nite in the Nite Club. In 1936, she was signed for comic roles by Paramount Pictures, and made her first picture for Paramount. Her first feature film was Rhythm on the Range with crooner Bing Crosby. Over the next 26 years, she would eventually appear with many of the leading comics of her day, including Joe E. Brown, Bob Hope, W. C. Fields, Abbott and Costello, Charlie Chaplin, and Jimmy Durante. She joined the USO soon after the US entered World War II.