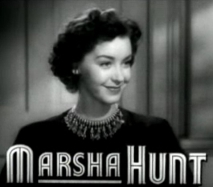 Marsha Hunt is an American film, theater, and television actress who was blacklisted by Hollywood movie studio executives in the 1950s.

Marsha Hunt attended the Theodore Irving School of Dramatics during her high school years. She was also a very good singer, and a model, before Paramount Pictures signed her to a contract in 1934. At 18 years of age, she made her film debut in The Virginia Judge.

In 1938, she married film director Jerry Hopper; they were divorced in 1943. Three years later, in 1946, she married television and film writer Robert Presnell Jr., which lasted until his death in June 1986.

During the late 1930s and into the 1940s, Hunt signed a number of petitions promoting liberal ideals. She was also a member of the Committee for the First Amendment. Because of this association, her name appeared in the pamphlet Red Channels. Although she and her husband, Robert Presnell, were never called before the House Un-American Activities Commission, like Charlie Chaplin, their names were put on the blacklist, and they found it extremely difficult to find work. On October 27, 1947, she flew with a group of about 30 actors, directors, writers, and filmmakers, to Washington D.C. to protest the actions of Congress. When she returned to Hollywood three days later, things had changed. She was asked to denounce her activities if she wanted to find more work–but she refused. For her, the issue here was not Communism, but freedom of speech, privacy of opinion, freedom of advocacy, and freedom of democracy. She did keep working until the publication of Red Channels, but afterwards it became very hard.