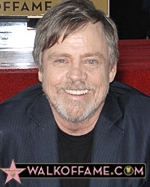 “In a Galaxy far, far away”…The Hollywood Chamber of Commerce is proud honored actor Mark Hamill with the 2,630th star on the Hollywood Walk of Fame today, March 8, at 11:30 a.m. PST. The star was dedicated in the category of Motion Pictures at 6834 Hollywood Boulevard in front of the El Capitan Theatre.

“Star Wars fans from around the world and a galaxy far, far away will be excited to hear that legendary actor Mark Hamill was honored with a star on the Hollywood Walk of Fame. We are proud to add this extraordinary talent to the historic Hollywood monument,” stated Ana Martinez, Producer of the Walk of Fame ceremonies.

Helping Master of Ceremonies and President & CEO of the Hollywood Chamber of Commerce Leron Gubler unveil the star were Harrison Ford and George Lucas. Also attending the event were two Storm Troopers and R2D2.

The Hollywood Chamber of Commerce, which administers the popular star ceremonies, encourages fans from around the world to watch the event exclusively on www.walkoffame.com.

Born in Oakland, California, Mark Hamill was discovered in a workshop musical comedy called Anthems in E-Flat Calliope the summer before becoming a theatre arts major at Los Angeles City College. There he learned all aspects of theatrical production and appeared in numerous plays and musicals.

For six years Hamill did guest appearances on multiple TV series and television movies, including a nine-month stretch on General Hospital and a starring-role on the critically-acclaimed comedy The Texas Wheelers. His first feature film was in George Lucas’ Star Wars.

Hamill’s career has encompassed all aspects of the entertainment industry, including stage, screen, television and new media. Best known as Luke Skywalker in George Lucas’ original Star Wars trilogy, he recently returned to the role in J.J. Abrams’ Star Wars: The Force Awakens and in Rian Johnson’s Star Wars: The Last Jedi.

His film credits include Corvette Summer, Samuel Fuller’s The Big Red One, Slipstream,Walking Across Egypt, Jay and Silent Bob Strike Back, Sushi Girl, Kingsman: The Secret Service and the upcoming Brisby Bear.

A prolific voice-over artist, Hamill has performed in countless animated series for television, feature films and video games. He played the unforgettable role of the Joker in Batman: The Animated Series, reprising the character for both the Arkham Asylum video game series (for which he received a BAFTA Award) and the 2016 groundbreaking animated film, Batman: The Killing Joke. He also returned as the Trickster on CW’s The Flash, a role he first played in the original CBSseries.

Hamill continues to be involved with many charitable organizations, which have included NAI (USC Neighborhood Academic Initiative), Make-A-Wish Foundation, and Feeding America.

-MAY THE FORCE BE WITH YOU- 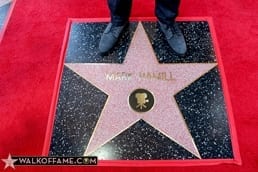