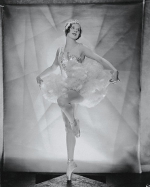 Marilyn Miller was one of the most popular Broadway musical stars of the 1920s and early 1930s. She was an accomplished tap dancer, singer and actress, but it was the combination of these talents that endeared her to audiences. On stage she usually played rags-to-riches Cinderella characters who lived happily ever after. By contrast her personal life was marked by tragedy and illness, ending in her death at age 37.

She was born Mary Ellen Reynolds in Evansville, Indiana, the youngest daughter of Edwin D. Reynolds, a telephone lineman, and his first wife, the former Ada Lynn Thompson. The tiny, delicate-featured blonde beauty was only four years old when, as “Mademoiselle Sugarlump,” she debuted at Lakeside Park in Dayton, Ohio as a member of her family’s vaudeville act, the Columbian Trio, which then included Marilyn’s step-father, Oscar Caro Miller, and two older sisters, Ruth and Claire. They were re-christened the Five Columbians after Marilyn and her mother joined the routine. From their home base in Findlay, Ohio, they toured the Midwest and Europe in variety for ten years, skirting the child labor authorities, before Lee Shubert discovered Marilyn at the Lotus Club in London in 1914.

Miller appeared for the Shuberts in the 1914 and 1915 editions of The Passing Show, a Broadway revue at the Winter Garden Theatre, as well as in The Show of Wonders and Fancy Free. But it was Florenz Ziegfeld who made her a star after she performed in his Ziegfeld Follies of 1918, at the famed New Amsterdam Theatre on 42nd Street, with music by Irving Berlin. Sharing billing with Eddie Cantor, Will Rogers and W.C. Fields, she brought the house down with her impersonation of Ziegfeld’s wife, Billie Burke, in a number entitled Mine Was a Marriage of Convenience.

She followed as a headliner in the Follies of 1919, dancing to Berlin’s “Mandy”, and reputedly became Ziegfeld’s mistress, though this was never proven. Miller attained legendary status in the Ziegfeld production Sally with music by Jerome Kern, especially for her performance of Kern’s “Look for the Silver Lining.” The musical, about a dishwasher who joins the Follies and marries a millionaire, ran 570 performances at the New Amsterdam. In 1921, a still-obscure Dorothy Parker memorialized her performance in verse: