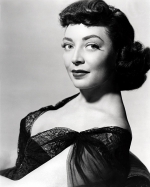 Marie Windsor. Born as Emily Marie Bertelson in Marysvale, Piute County, Utah, Windsor was an actress known as “The Queen of the Bs” because she appeared in so many film noirs and B-movies like Cat-Women of the Moon. However, other actresses, such as Fay Wray, Lucille Ball, and others have garnered the title as well.

Windsor, a former Miss Utah, trained for the stage under Maria Ouspenskaya, and after several years as a telephone operator, a stage and radio actress, and a bit and extra player in films, she began playing feature and lead parts in 1947.

Later she moved on to television, appearing on such shows as Maverick, Bat Masterson, The Incredible Hulk, General Hospital, Murder, She Wrote, Rawhide, and Salem’s Lot.