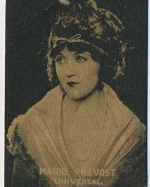 Marie Prevost was a Canadian-born actress of the early days of cinema. During her twenty year career, she made 121 silent and talking pictures.

Born Mary Bickford Dunn in Sarnia, Ontario, she was still a child her family moved first to Denver, Colorado and then later to Los Angeles. While working as a secretary, she applied for and obtained an acting job at the Hollywood studio owned by Mack Sennett. Sennett, who was from a small town outside of Montreal, dubbed her as the exotic “French girl”, adding Dunn to his collection of bathing beauties under the stage name of Marie Prevost.

In 1919, Prevost secretly married socialite Sonny Gerke who left her after six months of marriage. Gerke’s mother had forbidden him to associate with Prevost because she was an actress, so he was scared to tell his mother of the marriage?and he couldn’t get a divorce without revealing that he was married. Prevost, fearful of the bad publicity a divorce would cause, would stay secretly married to Gerke until 1923.

One of her first publicly successful film roles came in the 1920 romantic film Love, Honor, and Behave, opposite another newcomer and Sennett protegé, George O’Hara. Initially cast in numerous minor comedic roles as the sexy, innocent young girl, she worked in several films for Sennett’s studio until 1921 when she signed with Universal. At Universal, Irving Thalberg took an interest in Prevost and decided to make her a star. Thalberg ensured that she received a great deal of publicity and staged numerous publicity events. After announcing that he had selected two films for Prevost to star in, The Moonlight Follies and Kissed, Thalberg sent Prevost to Coney Island where she publicly burned her bathing suit to symbolize the end of her bathing beauty days.