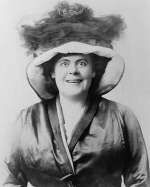 Marie Dressler was a Canadian actress and Depression-era film star. She won the Academy Award for Best Actress in 1932 in Min and Bill.

Born Leila Marie Koerber in Cobourg, Ontario, to parents Alexander Rudolph Koerber and Anna Henderson, the young Dressler was able to hone her talents to make people laugh, and began her acting career when she was fourteen. In 1892 she made her debut on Broadway. At first she hoped to make a career of singing light opera, but then gravitated to vaudeville. In vaudeville she was known for her full-figured body?fashionable at the time?and had buxom contemporaries such as her friends Lillian Russell, Fay Templeton, May Irwin and Trixie Friganza. She used the services of ‘body sculptor to the stars’ Sylvia of Hollywood to keep herself at a steady weight.

She appeared in a play called Robber of the Rhine which was written by Maurice Barrymore. Barrymore gave Dressler some positive advice about furthering her career and she later acknowledged his help. Years later she would appear with his sons, Lionel and John, in motion pictures. During the early 1900s, she became a major vaudeville star, although she had appeared on stage in New York City earlier, for example, in 1492 Up To Date. In 1902, she met fellow Canadian Mack Sennett and helped him get a job in the theater. In addition to her stage work, Dressler recorded for Edison Records in 1909 and 1910.

Dressler’s first role in a film was in 1910, when she was 42. After Sennett became the owner of his namesake motion picture studio, he convinced Dressler to star in his highly successful 1914 silent film Tillie’s Punctured Romance, opposite Sennett?s newly discovered actor, Charlie Chaplin. Dressler appeared in two more “Tillie” sequels and other comedies until 1918, when she returned to vaudeville.