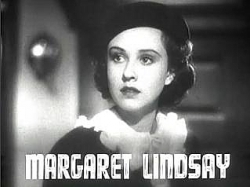 Margaret Lindsay was an American film actress. Her time as a Warner Bros. contract player during the 1930s was particularly productive. She was noted for her supporting work in successful films of the 1930s and 1940s such as Jezebel and Scarlet Street and her leading roles in lower-budgeted B movie films such as the Ellery Queen series at Columbia in the early 1940s. Critics regard her portrayal of Nathaniel Hawthorne’s Hepzibah Pyncheon in the 1940 film adaptation of The House of the Seven Gables as Lindsay’s standout career role.

Born as Margaret Kies in Dubuque, Iowa, she was the oldest of five children of a pharmacist father who died in 1930 before her Hollywood career began. According to Tom Longden of the Des Moines Register, “Peg” was “a tomboy who liked to climb pear trees” and was a “roller-skating fiend”. She graduated in 1930 from Visitation Academy in Dubuque.

After attending National Park Seminary in Washington, D.C., Lindsay convinced her parents to enroll her at the American Academy of Dramatic Arts in New York. She then went abroad to England to make her stage debut. She appeared in plays such as Escape, Death Takes a Holiday, and The Romantic Age.

Lindsay was often mistaken as being British due to her convincing English accent, which impressed Universal Studios enough to sign her for their 1932 version of The Old Dark House. As James Robert Parish and William T. Leonard wrote in Hollywood Players: The Thirties, Lindsay returned to America and arrived in Hollywood, only to discover that Gloria Stuart had been cast in her role in the film.