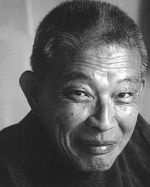 A Japanese-American actor, many of his acting roles credited him simply as Mako, omitting his surname. Mako is known for Aku from Samurai Jack, Master Splinter from the movie TMNT, Iroh from, and Akiro from Conan the Barbarian. Mako was born in Kobe, Japan, the son of noted children's book author and illustrator Taro Yashima. His parents moved to the United States when he was a small child. He joined them there after World War II, in 1949, joining the military in the 1950s. He became a naturalized American citizen in 1956. When Mako first joined his parents in the USA, he studied architecture. During his military service, he discovered his theatrical talent, and trained at the Pasadena Community Playhouse.

Mako was married to actress Shizuko Hoshi with whom he had two daughters and three grandchildren.

Mako's first cinema role was in the 1959 film Never So Few. In 1965, frustrated by the limited roles available to himself and other Asian American actors, Mako and six others formed the East West Players theatre company, first performing out of a church basement. The company is one of the earliest Asian American theatre organizations, and not only provided a venue for Asian American actors to train and perform, but nurtured many Asian American playwrights. Mako remained artistic director of the company until 1989.