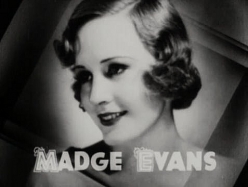 Madge Evans was an American stage and film actress. She began her career as a child performer and model.

Born as Margherita Evans, Madge Evans was featured in print ads as the ‘Fairy Soap girl’ as an infant. She made her professional debut at the age of six months, posing for artist’s models. As a youth, her playmates included Robert Warwick, Holbrook Blinn, and Henry Hull. When she was four years old, Evans was featured in a series of child plays produced by William A. Brady. She worked at the old Long Island, New York movie studio. Her success was immediate, so much so that her mother loaned her daughter’s name to a hat company. Evans posed in a mother and child tableau with Anita Stewart, then 16, for an Anheuser-Busch Brewing Company calendar, and as the little mountain girl in Heidi of the Alps.

At the age of 8 in 1917, Evans appeared in the Broadway production of Peter Ibbetson with John Barrymore, Constance Collier and Laura Hope Crews. At 17, she returned to the stage and appeared as the ingenue in Daisy Mayme. Some of her best work in plays came in productions of Dread, The Marquis, and The Conquering Male. Her last appearance was in Philip Goes Forth produced by George Kelley. Evans’ mother took her to England and Europe when she was 15.

As a child film actress Evans had quite a prolific career appearing in dozens of films. In 1914 aged 5 she appeared with Marguerite Clark in Seven Sisters, a film with a large female ensemble that had been played on stage with Clark’s rival Mary Pickford and Laurette Taylor in the cast. In 1915 she was with Robert Warwick in Alias Jimmy Valentine, a still extant film that has seen release on home video/dvd. At 14 she was the star of J. Stuart Blackton’s rural melodrama On the Banks of the Wabash. She co-starred with Richard Barthelmess in Classmates.