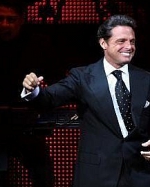 Beginning his musical career in his childhood, Luis Miguel has become one of the most popular singers from Latin America, having performed successfully pop music, bolero, mariachi and romantic ballads. In a career that has spanned over twenty-five years, Luis Miguel has won four Latin Grammy Awards and five Grammy Awards. He is called “El Sol de México” by the media and his fans.

At the age of fifteen, Luis Miguel received a Grammy Award for his duet “Me Gustas Tal Como Eres” with Sheena Easton. In 1991, the RIAA gave him a recognition for the high sales of the albums Romance and Segundo Romance. Luis Miguel is the only Latin artist to have two Spanish-language albums go platinum in the USA. He was the only Latin artist to perform at the show “SINATRA: 80 Years My Way”, along with other pop icons such as Bruce Springsteen, Natalie Cole and Bob Dylan. In 1996, Luis Miguel became the first Latin artist to receive a star in the Hollywood Walk of Fame. His album Romances of 1997, became the first Spanish-language album ever debuting at #14 on the Billboard Top 200. Warner Music recognized Luis Miguel as the best-selling artist in the history of Chile with over 2.5 million records sold. In 2003, Prince Felipe of Spain presented him with a special award for being the best-selling foreign artist in his country’s history. In 2008, Luis Miguel’s album Navidades became the first Christmas album ever being nominated to the Grammy in the category of Pop. His last album, Cómplices, broke records in Mexico, by selling over 320,000 copies in its first day of release.

Luis Miguel is also known by his high-grossing tours and his outstanding live performances. His Amarte Es Un Placer Tour had a length of 8 months and run through Mexico, USA, Argentina, Chile, Uruguay, Venezuela, Brazil and Spain between 1999 and 2000. The tour consisted of 104 concerts and was attended by approximately 1.4 million fans. It was the highest-grossing tour ever made by a Latin artist, as well as the most extended. These two records have been broken by his Mexico En La Piel Tour. His 33 Tour peaked at #1 in the Billboard World Top Boxscore. The Mexico En La Piel Tour of 2005, peak #1 in the Billboard World Top Boxscore. In 2006, he was awarded with the “Estela de Plata” by giving 30 concerts at the Auditorio Nacional in Mexico, gathering over 260,000 spectators.