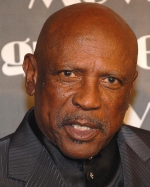 Louis Cameron Gossett, Jr. is an American actor best known for his role in An Officer and a Gentleman. He was the first African-American male to win an Oscar in a supporting role; the second black male to win for acting; and, the third African-American actor to win overall. Gossett also appeared in films such as The Principal, The Deep and Jaws 3-D, in a film career that spans over five decades.

Gossett, Jr. was born in Sheepshead Bay, Coney Island, Brooklyn, New York, to Hellen Rebecca, a nurse, and Louis Gossett, Sr., a porter. His stage debut came at the age of 17, in a school production of You Can’t Take It with You when a sports injury resulted in the decision to take an acting class. Polio had already delayed his graduation.

After graduating from Abraham Lincoln High School in 1954, he attended New York University, declining an athletic scholarship. Standing 6’4″, he was offered the opportunity to play varsity basketball during his college years at NYU, which he declined to concentrate on theater. His high school teacher had encouraged him to audition for a Broadway part, which resulted in his selection for a starring role on Broadway in 1953 from among 200 other actors well before he entered NYU.

Gossett stepped into the world of cinema in the Sidney Poitier vehicle A Raisin in the Sun in 1961. However, in 1953 he made Broadway history appearing as a star in “Take a Giant Step,” which was selected by the New York Times drama critics as one of the 10 best shows of the year. He was 19, and still a student at Abraham Lincoln High School, with no formal drama training. He had been delayed in graduating by a bout with polio. He entered NYU in 1954, declining a basketball scholarship to participate in their theater arts program.