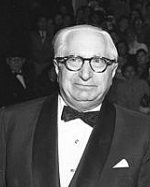 About
Louis B. Mayer

Louis Burt Mayer was a Belarus-born American film producer. He is generally cited as the creator of the “star system” within Metro-Goldwyn-Mayer in its golden years. Known always as Louis B. Mayer and often simply as “L.B.”, he believed in wholesome entertainment and went to great lengths so that MGM had “more stars than there are in the heavens”.

Born Lazar Meir to a Jewish family in Minsk, today the capital of Belarus, then part of the Russian Empire, capital of the Minsk Province. His actual birthdate is unknown; a patriotic Mayer chose July 4 when he became an American citizen, to honor his adopted country. Mayer emigrated with his family to Saint John, New Brunswick, Canada when he was still very young, and Mayer attended school there. His father started a scrap metal business, J. Mayer & Son. His parents, Sarah and Jacob Mayer, had five children: Yetta, Ida, Louis, Jerry and Rudolph. In 1904, the 19-year-old Mayer left Saint John for Boston, where he continued for a time in the scrap metal business, married, and took a variety of odd jobs to support his family when his junk business lagged.

in Haverhill, Massachusetts, which he reopened on November 28, 1907 as the Orpheum, his first movie theater. To overcome the unfavorable reputation that the building once had in the community, Mayer decided to debut with the showing of a religious film. Years later, Mayer would say that the premiere at the Orpheum was From the Manger to the Cross, although most sources place the release date of that film as 1912. Within a few years, he owned all five of Haverhill’s theaters, and, with Nathan H. Gordon, created the Gordon-Mayer partnership that controlled the largest theater chain in New England.