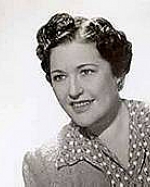 Louella Parsons was an American gossip columnist who, for many years, was an influential arbiter of Hollywood mores, often feared and hated by the individuals, mostly actors, whose careers she could negatively impact via her radio show and newspaper columns.

She was born Louella Rose Oettinger in Freeport, Illinois, the daughter of Joshua Oettinger and Helen Stein, both of whom were Jewish. She had two brothers, Edwin and Fred, and a sister, Rae. In 1890, her widowed mother married John H. Edwards. They lived in Dixon, Illinois, later hometown of Ronald Reagan. While still in high school, Parsons obtained her first newspaper job when she became drama editor for the Dixon Morning Star.

She and her first husband, John Parsons, moved to Burlington, Iowa. Her only child, Harriet, who grew up to become a film producer, was born there. While in Burlington, Parsons saw her first motion picture, The Great Train Robbery. When her marriage broke up, Parsons moved to Chicago where she began writing movie scripts for Essanay Studios, once the home of Charlie Chaplin. Her small daughter, Harriet, was billed as "Baby Parsons" in several movies, which included The Magic Wand, written by Louella Parsons. She also wrote a book titled How to Write for the Movies. 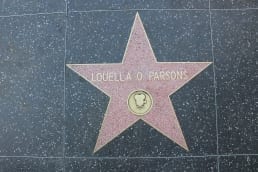