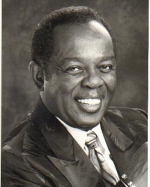 Louis Allen “Lou” Rawls was an American soul, jazz, and blues singer. He was known for his smooth vocal style: Frank Sinatra once said that Rawls had “the classiest singing and silkiest chops in the singing game”. Rawls released more than 70 albums, sold more than 40 million records, appeared as an actor in motion pictures and on television, and voiced-over many cartoons.

Rawls is the subject of an upcoming biopic, tentatively titled Love Is a Hurtin’ Thing: The Lou Rawls Story. Rawls’ son, Lou Rawls Jr., is the author of the script. Rawls will reportedly be portrayed by the actor Isaiah Washington. Rawls’ favorite expression was “Yeah buddy!”

Rawls was born on December 1, 1933 in Chicago and raised by his grandmother in the Ida B. Wells projects on the city’s South Side. He began singing in the Greater Mount Olive Baptist Church choir at the age of seven and later sang with local groups through which he met future music stars Sam Cooke, who was nearly three years older than Rawls, and Curtis Mayfield.

After graduating from Chicago’s Dunbar Vocational Career Academy, he sang briefly with Cooke in the Teenage Kings of Harmony, a local gospel group, and then with the Holy Wonders. In 1951, Rawls replaced Cooke in the Highway QC’s after Cooke departed to join The Soul Stirrers in Los Angeles. Rawls was soon recruited by the Chosen Gospel Singers and himself moved to Los Angeles, where he subsequently joined the Pilgrim Travelers.