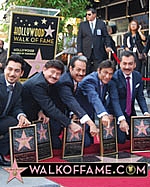 Watch Los Tigres Del Norte Unveil their star at the end of this page.

Emcee and Hollywood Chamber of Commerce President and CEO,  Leron Gubler unveiled the star for Los Tigres Del Norte in the category of Recording. The star ceremony was streamed live exclusively on www.walkoffame.com.

During the early ’70s, Los Tigres became the first act signed to Fama Records. Founded by Art Walker, Fama grew to become the leading Spanish-language record label on the West Coast. Walker, a local impresario, first heard the group on a live radio presentation recorded at the local Parque de las Flores on Keyes Street in San Jose, and impressed with what he heard, he decided to make them the foundation of Fama. With his guidance, Los Tigres adopted an electric style, trading in their traditional acoustic sound for one incorporating bass, drums, and electric guitar. The group also adopted a modern approach to songwriting, emphasizing contemporary social themes common to Mexican-Americans.

In the 1980s, Los Tigres moved to Fonovisa Records and furthered their success. Beginning with Jaula De Oro (1984), the group would regularly top the regional Mexican album chart stateside, and this success was acknowledged in 1987 when they won the initial Grammy Award for Best Mexican-American Performance, for Gracias America…..Sin Fronteras (1986).

In the diverse world of Latin music, the Regional Mexican genre alone accounts for more than half of all music sales, according to Billboard. This popular genre outpaces the combined sales of Pop, Rock, Tropical, Urban and all other styles, and Los Tigres Del Norte are the undisputed legends of the genre.

The group has more than 500 recorded songs to their credit. Los Tigres del Norte have sold more than 37 million albums worldwide, notching 22 No. 1 albums and more than 50 No. 1 singles. The group has received countless Platinum records and numerous awards including six Grammy and six Latin Grammys, the Latin Recording Academy’s Lifetime Achievement Award, and The Hispanic Heritage “Legends” Awardat The Kennedy Center. They won multiple Premio Lo Nuestro awards, and are the recipients of the BMI ICON Award.

Their unrivaled career spans four decades. Los Tigrescontinues to be at the forefront of Latin music popularity performing regularly to sold-out audiences. Los Tigres Del Norte songs debut at No. 1 on the charts with each album and single they release.

They continue to blaze new trails for the genre and achieve new milestones. In 2013, they were joined by numerous members of Congress at the massive “Camino Americano: Rally & March for Immigrant Dignity & Respect” at the National Mall in Washington, DC. In 2011, the band was featured in “MTV Unplugged: Los Tigres Del Norte & Friends,” the first album to be dedicated to the Regional Mexican genre. The album quickly became a commercial success and went on to earn a rare Diamond sales certification. In 2010, the group headlined Mexico’s Historic Bicentennial Celebration. The group recently released the eagerly-awaited new single La Bala (The Bullet) which is their first new studio recording in four years, and the first advance release of a highly-anticipated new album arriving in October.

Their long-standing career has also garnered the band numerous accolades. Del Norte is the first Mexican group to sing in Spanish on the American Music Awards. The band received The Smithsonian Legacy Award, and were the subject of a Smithsonian Institute Traveling Exhibit entitled “Corridos Sin Fronteras.” The Spanish group headlined one of the largest concerts in Los Angeles history drawing over 200,000 fans and also performed to a sold-out audience at Walt Disney Hall in Los Angeles. Del Norte also appeared in more than 15 films, including Sundance Favorite ‘La Misma Luna’.

In 2000, Los Tigres Del Norte institutionalized their charitable efforts by establishing the Los Tigres Del Norte Foundation to further the appreciation and understanding of Hispanic music, culture, and history through education and community outreach programs. The Foundation donated $500,000 to UCLA’s Chicano Studies Center to create and preserve The Frontera Collection of Mexican and Mexican American Recordings, the world’s largest collection of historical Mexican music recordings. The band also opened a music school for children in need in their home state of Sinaloa, Mexico. These days. Del Norte are staple performers for USO programs to entertain troops abroad in Japan, Korea, Germany and Italy. 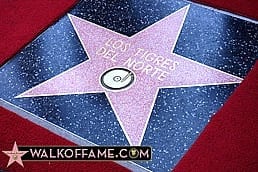