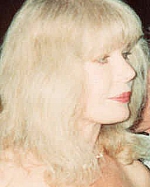 Loretta Swit is an American stage and television actress known for her character roles. Swit is best-known for her portrayal of Major Margaret “Hot Lips” Houlihan on M

Swit was born in [[Passaic, New Jersey of Polish descent. She studied with Gene Frankel in Manhattan and considered him her acting coach. She regularly returned to his studio to speak with aspiring actors throughout her career. Swit is also a singer who trained at the American Academy of Dramatic Arts before entering the theater. She graduated from Pope Pius XII High School in Passaic, NJ, in 1955.

In 1967, Swit toured with the national company of Any Wednesday, starring Gardner McKay. She continued as one of the Pigeon sisters opposite Don Rickles and Ernest Borgnine in a Los Angeles run of The Odd Couple.

In 1975, Swit played in Same Time, Next Year on Broadway opposite Ted Bessell. She also performed on Broadway in The Mystery of Edwin Drood. From there, she played Agnes Gooch in the Las Vegas version of Mame, starring Susan Hayward and later, Celeste Holm. Most recently, Swit has toured with The Vagina Monologues”.