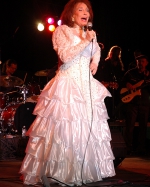 Loretta Lynn is an American actress, country music singer-songwriter, author, business woman, and philanthropist; she was one of the leading country vocalists and songwriters during the 1960s, and continues to be one of the most successful vocalists of all time.

Her best-selling 1976 autobiography, Coal Miner's Daughter, was made into a hit Academy Award-winning film starring Sissy Spacek and Tommy Lee Jones in 1980.

Including solo and duet work, Loretta Lynn has released 16 number one country hits over the course of her career.