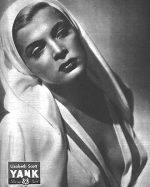 Lizabeth Scott is an American actress and singer widely known for her film noir roles.

She was born Emma Matzo in the Pine Brook section of Scranton, Pennsylvania, one of six children, to Ukrainian born parents who emigrated from Uzhgorod, Ukraine. She attended Central High School and Marywood College.

She later went to New York City and attended the Alvienne School of Drama. In late 1942, she was eking out a precarious living with a small Midtown Manhattan summer stock company when she got a job as understudy for Tallulah Bankhead in Thornton Wilder’s play The Skin of Our Teeth. However, Scott never had an opportunity to substitute for Bankhead.

When Miriam Hopkins was signed to replace Bankhead, Scott quit and returned to her drama studies and some fashion modeling. She then received a call that Gladys George, who was signed to replace Hopkins, was ill, and Scott was needed back at the theatre. She went on in the leading role of “Sabina”, receiving a nod of approval from critics at the tender age of 20. The following night, George was out again and Scott went on in her place.