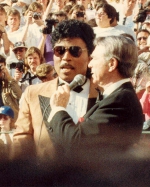 Richard Wayne Penniman, known by the stage name Little Richard, is an American singer, songwriter, pianist and recording artist, considered key in the transition from rhythm and blues to rock and roll in the 1950s. The Rock and Roll Hall of Fame web site entry on Penniman states that:

Penniman began his recording career in 1951 by imitating the gospel-influenced style of late-1940s jump blues artist Billy Wright, but did not achieve commercial success until 1955, when, under the guidance of Robert “Bumps” Blackwell, he began recording in a style he had been performing onstage for years, featuring varied rhythm, a heavy backbeat, funky saxophone grooves, over-the-top Gospel-style singing, moans, screams, and other emotive inflections, accompanied by a combination of boogie-woogie and rhythm and blues music. This new music, which included an original injection of funk into the rock and roll beat, inspired many of the greatest recording artists of the twentieth century, including James Brown, Elvis Presley, Otis Redding, Michael Jackson, and generations of other rhythm & blues, rock and soul music artists. He was subsequently among the seven initial inductees into the Rock and Roll Hall of Fame in 1986 and was one of only four of these honorees to also receive the Rhythm and Blues Foundation’s Pioneer Lifetime Achievement Award.

In October 1957, while at the height of stardom, Penniman abruptly quit rock and roll music and became a born-again Christian. In January 1958, he enrolled in and attended Bible college to become a preacher and evangelist and began recording and performing only gospel music for a number of years. He then moved back and forth from rock and roll to the ministry, until he was able to reconcile the two roles in later life.

Richard Wayne Penniman was born in Macon, Georgia, the third of 12 children of Charles “Bud” Penniman, Sr., a bootlegger and his wife Leva Mae. He grew up in a religious family in which singing was an integral part of their lives; they performed in local churches as The Penniman Singers, and entered contests with other singing families. His family called him “War Hawk” because of his loud, screaming singing voice. His grandfather, Walter Penniman, was a preacher, and his father’s family were members of the Foundation Templar African Methodist Episcopal Church in Macon. His maternal grandmother was a member of Macon’s Holiness Temple Baptist Church. Penniman attended the New Hope Baptist Church in Macon, where his mother was a member. Penniman’s favorites were the Pentecostal churches because of the music and the fun he would have doing the holy dance and speaking in tongues with members of the congregation. When he was 10, he became a faith healer, singing gospel songs and touching people, who would testify that they felt better afterwards. Inspired by Brother Joe May, a singing evangelist known as “The Thunderbolt of the West”, Penniman wanted to become a preacher.