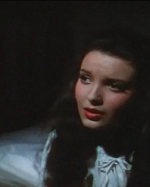 Linda Darnell was an American film actress. Darnell was a model as a child, and progressed to theater and film acting as an adolescent. At the encouragement of her mother, she made her first film in 1939, and appeared in supporting roles in big budget films for 20th Century Fox throughout the 1940s. She rose to fame with co-starring roles opposite Tyrone Power in adventure films and established a main character career after her role in Forever Amber. Furthermore, she won critical acclaim for her work in Unfaithfully Yours and A Letter to Three Wives. Notorious for her unstable personal life, Darnell was incapable of dealing with Hollywood, and landed in a downward spiral of alcoholism, unsuccessful marriages and highly publicized or scandalous affairs. She failed to receive recognition from the industry and its critics, and disappeared from the screen in the 1950s. Darnell died from burns sustained in a house fire.

Born Monetta Eloyse Darnell in Dallas, Texas, as one of four children, to postal clerk Calvin Roy Darnell and Pearl Brown. She was the younger sister of Undeen, born in March 1918, and the older sister of Monte Maloya and Calvin Roy, Jr. Her parents were not happily married, and she grew up as a shy and reserved girl in a house of domestic turmoil. Starting at an early age, her mother Pearl had big plans for Darnell in the entertainment industry. Her mother believed that Darnell was her only child with potential as an actress, and ignored the raising of her other children.

According to her siblings, Darnell enjoyed the limelight and shared her mother’s dream. Darnell herself, though, once commented: “Mother really shoved me along, spotting me in one contest after another. I had no great talent, and I didn’t want to be a movie star particularly. But Mother had always wanted it for herself, and I guess she attained it through me.” One elocution teacher recalled: ” didn’t stand out particularly, except that she was so sweet and considerate. In her theater work she wasn’t outstanding. But her mother was right behind her everywhere she went.”